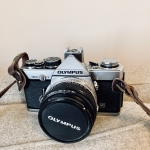 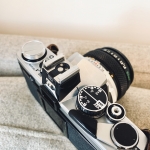 When I moved to London in 2017, my perception started changing. I went to film school and a lot of creatives I came across shot film. There is also a demand for it here so it is easier to shoot analog.

Fast forward to some time this year, I decided that I needed a distraction and something new to learn as a creative, so I picked up a disposable camera over the summer. About a month later, I got my first scans, Yaaay! Of course I was excited. They weren’t great results, LOL, actually they were the worst quality but they increased my interest in exploring the medium some more.

Going forward, I got an Olympus OM2N + 50mm from eBay. (Thanks to my mate Leon Frind and the internet for answering my million and one questions). I took 2 rolls of film – Kodak ultra max 400 & Ilford Delta 400 – on a couple of projects I was working on at the time. The clients were expecting digital so I wasn’t under pressure. I also picked up a Plustek Optic Film 8100 scanner to scan them at home after developing the negatives at a local lab.

The entire process wasn’t as mad as I thought it will be for my first time and I definitely will be exploring this medium some more. Undoubtedly, I made a lot of newbie mistakes but I think the worst one was that I opened the back… twice. ??

Anyway, here are some of the images I was able to get.